The Tank Battle at Prokhorovka Kursk July 1943 An Operational Narrative 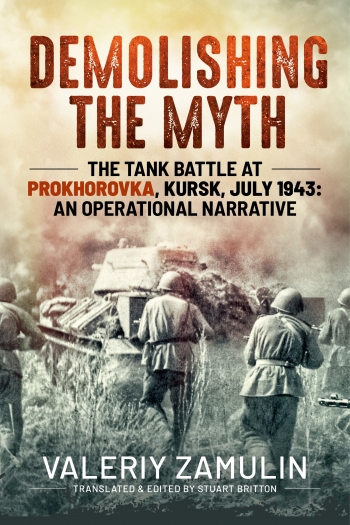 A groundbreaking book when first published in Russia in 2005, now Valeriy Zamulin's study of the crucible of combat during the titanic clash at Kursk - the fighting at Prokhorovka - is available in English. A former staff member of the Prokhorovka Battlefield State Museum, Zamulin has dedicated years of his life to the study of the battle of Kursk, and especially the fighting on its southern flank involving the famous attack of the II SS Panzer Corps into the teeth of deeply-echeloned Red Army defenses. A product of five years of intense research into the once-secret Central Archives of the Russian Ministry of Defense, Zamulin lays out in enormous detail the plans and tactics of both sides, culminating in the famous and controversial clash at Prokhorovka on 12 July 1943. Zamulin skillfully weaves reminiscences of Red Army and Wehrmacht soldiers and officers into the narrative of the fighting, using in part files belonging to the Prokhorovka Battlefield State Museum. Zamulin has the advantage of living in Prokhorovka, so he has walked the ground of the battlefield many times and has an intimate knowledge of the terrain.Examining the battle from primarily the Soviet side, Zamulin reveals the real costs and real achievements of the Red Army at Kursk, and especially Prokhorovka. He examines mistaken deployments and faulty decisions that hampered the Voronezh Front's efforts to contain the Fourth Panzer Army's assault, and the valiant, self-sacrificial fighting of the Red Army's soldiers and junior officers as they sought to slow the German advance, and then crush the II SS Panzer Corps with a heavy counterattack at Prokhorovka on 12 July. The combat on this day receives particular scrutiny, as Zamulin works to clarify the relative size of the contending forces, the actual area of this battle, and the costs suffered by both sides. The costs to General P. A. Rotmistrov's 5th Guards Tank Army and General A. S. Zhadov's 5th Guards Army as they slammed into 1st SS Panzer Grenadier Division Leibstandarte Adolf Hitler, 3rd SS Panzer Grenadier Division Totenkopf and a portion of 2nd SS Panzer Grenadier Division Das Reich were particularly devastating, and Zamulin examines the nuts and bolts of the counteroffensive to see why this was so.Zamulin does not exclude the oft-overlooked efforts of Army Group Kempf's III Panzer Corps on the right-wing of the Fourth Panzer Army, as it sought to keep pace with the II SS Panzer Corps advance, and then breach the line of the Northern Donets River in order to link up with its left-hand neighbor in the region of Prokhorovka. Zamulin describes how the Soviet High Command and the Voronezh Front had to quickly cobble together a defense of this line with already battered units, but needed to reinforce it with fresh formations at the expense of the counterstroke at Prokhorovka.Printed on heavy stock gloss paper, illustrated with many photographs (including a colour section showing present-day views of the battlefield), specially-commissioned colour maps and supplemented with extensive tables of data, Zamulin's book is an outstanding contribution to the growing literature on the battle of Kursk, and further demolishes many of the myths and legends that grew up around this battle.

“Zamulin’s fresh new book on Kursk represents the best of recent Russian scholarship on the war and is as close to definitive as possible.” David M. Glantz

“Zamulin’s painstaking analysis definitively establishes the Soviet counterattack at Prokhorovka as the decisive event in the Battle of Kursk, and a turning point in the development of the Red Army. Comprehensive scholarship and convincing reasoning, enhanced by an excellent translation, place this work on a level with the best of David Glantz.” Dennis Showalter, Colorado College

"In his majestic and provocative book ... Zamulin analyses the real costs and achievements of the Red Army at Kursk, and especially Prokhorovka ... Using an overwhelming and stunning amount of sources, both from German and especially Russian archives as well as from participants in the battle and secondary literature, he paints a vivid and often horrifying picture of the events that occurred ... Zamulin is to be congratulated on writing a highly convincing and thorough analysis of the tank battle at Prokhorovka. By doing so, he indeed demolishes many of the myths that surround that pivotal engagement ... Zamulin has written a book that will be the standard on the Prokhorovka battle for many years to come". Martijn Lak, Journal of Slavic Military Studies

"Demolishing the Myth is a much needed and very welcome addition to military-historical writing on the Eastern Front, a refreshing change to the standard Anglo-American-German interpretation of events." Dr Steven J Main, DefAc UK, British Army Review

"It is very difficult to do justice to the level of detail provided in this study... in summary, Zamulin has managed to lift the lid on many of the weaknesses of the Red Army during the Battle of Kursk ... While the casual reader may find the length of the narrative rather daunting, the specialist interested in the history of armored warfare and the Great Patriotic War will delight in it. Yet the significance of this work goes further; it provides a genuine, brave, and honest corrective to the Soviet historiography on the Red Army's efforts at the Battle of Kursk. The publisher, Helion, is to be congratulated for making it available to an English-speaking audience, not least of all given the excellent maps and photographic material which are included." Alaric Searle, Centre for European Security, University of Salford, reviewing for Global War Studies

"I cannot recommend this book too highly ... Scrupulously researched and supplemented by a number of excellent maps and photographs, this work will intrigue and inform serious students of the Eastern Front for years to come." Richard W. Harrison, The Russian Review

“ … painstakingly researched … to produce perhaps most accurate look yet at why and how the German offensive failed to meet its objectives … an absorbing read, even for those who consider themselves otherwise well-informed on the topic.” Globe at War

“Zamulin’s book is undoubtedly a detailed and factual contribution to the pool of information about the battle of Kursk, and destroys some of the myths, legends and misinformation that this battle had spawned.” Classic Military Vehicles