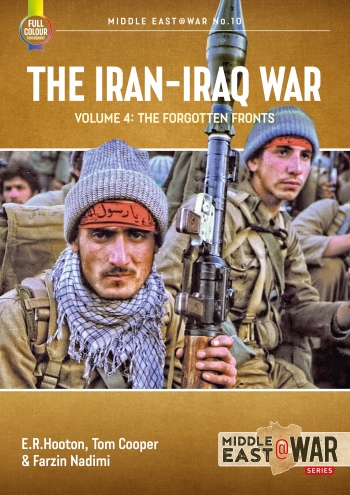 The Iran-Iraq War was one of the bloodiest conflicts of the 20th Century and accidentally created the current nightmare of Islamic fundamentalist terrorism. There have been many books on the conflict but this is the first detailed military history using materials from both sides, as well as materials obtained from US Intelligence circles and British Governmental archives. It provides a unique insight into a war which began through miscalculation and rapidly escalated into the longest conventional conflict in the post-Second World War era. Part 4 in this mini-series covers the warfare between Iran and Iraq on the Central and Northern Fronts. Difficult terrain made it problematic for either side to assemble overwhelming superiority. Following initial Iraqi attacks that seized some territory, the Iranians began gradually nibbling back until achieving some success in the centre, in 1982. Subsequently, the Central Front saw only minor conventional battles until Iraq launched several major blows in 1988. In the north, fighting primarily revolved around several Kurdish insurgencies in northern Iraq, and culminated in the horror of the Halabcheh gas attack. The final campaign of the war saw Iraq-supported Iranian émigrés launching a spectacular, but also a swiftly-crushed, invasion of their homeland.

“This book is a valuable addition to the Middle East War series and deserves a place in the collection of anyone interested in the military conflicts of the region. Modellers will be rewarded with a valuable visual reference, as well as an inspiring read which will have you poking around in your stash, looking at your AFV kits in a different light. Highly recommended.” Britmodeller.com

“As with the previous volumes, the current title offers a good mix of high-quality photographs and well written text, mainly at the operational and strategic levels.” Miniature Wargames