Hell in the Trenches

Austro-Hungarian Stormtroopers and Italian Arditi in the Great War 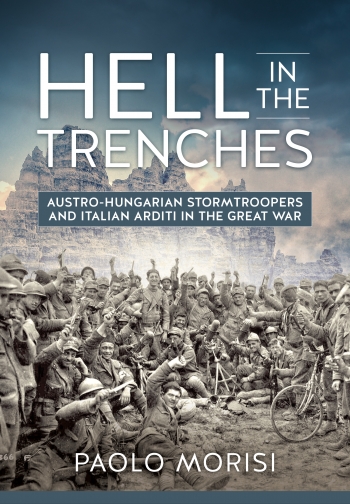 The Austro-Hungarian Stormtroopers and the Italian Arditi of World War I were elite special forces charged with carrying out bold raids and daring attacks. These units were comprised of hand-picked soldiers that possessed above-average courage, physical prowess as well as specific combat skills. Many military historians have argued that the First World War was mainly a static conflict of positional attrition, but these shock troops were responsible for developing breakthrough tactics of both fire and movement that marked a significant change to the status quo. Both armies used special assault detachments to capture prisoners, conduct raids behind enemy lines and attack in depth in order to prepare the way for a broad infantry breakthrough. This account traces the development of Austrian and Italian assault troop tactics in the context of trench warfare waged in the mountainous front of the Alps and the rocky hills of the Carso plateau. It not only examines their innovative tactics but also their adoption of vastly improved new weapons such as light machine-guns, super-heavy artillery, flamethrowers, hand grenades, daggers, steel clubs and poison gas. This book offers a narrative of the organizational development of the shock and assault troops, of their military operations and their combat methods. The bulk of the chapters are devoted to a historical reconstruction of the assault detachments' combat missions between 1917-18 by utilizing previously unreleased archival sources such as Italian and Austrian war diaries, official manuals, divisional and High Command reports and the soldiers' own recollections of the war. Finally, it offers a comprehensive description of their uniforms, equipment, and weapons, along with a large number of illustrations, maps and period photographs rarely seen. This epic trial of military strength of these special stormtroops cannot be properly understood without visiting, and walking, the battlefields. The appendix thus offers the reader a series of walks to visits key high mountain fortifications in the Italian Dolomites, many of which have attained almost legendary status.

"Whilst it might appear a rather specialist book, it demonstrates well the need for adaptation in warfare, often driven by the successful endeavours of a handful of junior commanders rather than a major doctrinal change stemming from the top. Highly recommended." Miniature Wargames

"...overall 'Hell in the Trenches' is a very good treatment of the development of special assault forces in the war." NYMAS Review/StrategyPage